The great organ, the last masterpiece built by Aristide Cavaillé-Coll, is one of the most recorded organs of the world and one of the most beautiful from the symphonic period.

An organ was built in 1630 by Crespin Carlier. In 1888 Aristide Cavaillé-Coll awarded the contract to rebuild it, as the organ had fallen into disrepair. Cavaillé-Coll re-used the existing pipework and stops in good condition and kept the casing of 1630. The organ contained 64 stops, 84 ranks, spread across 4 manuals and pedal. The manuals contained 56 notes, and the pedal 30.

This 4-keyboards and 64-stops organ was inaugurated by Charles-Marie Widor on April 17, 1890. Later, his Symphony Gothique, was premiered on this organ, and dedicated to the memory of bishop St. Ouen of Rouen.
The organ case is listed as Historical Landmark since 1970 while the instrumental portion since 1976. 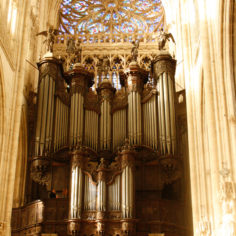 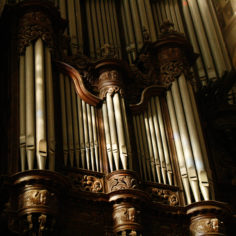